TECHNOLOGY OBJECT OF THE DAY (ONLINE) 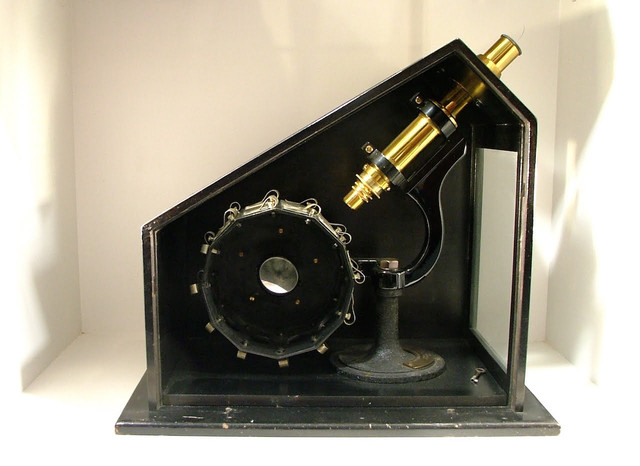 The microscope had been found in good condition hidden away in a cupboard by head of department in the College of Life Sciences Cathy Caudwell and was thought to have been used in the early 1900s, when the University of Dundee was part of the University of St Andrews. This brings about the exciting question of whether or not the microscope was used by D’Arcy Thompson, the first Professor of Biology at University College Dundee. Thompson also created the University’s first Zoology museum, which makes it likely that he obtained the microscope for display.

The Waterhouse Museum Microscope was designed for the display of 12 microscopic objects on slides in a museum or exhibition. The microscope’s design allowed for it to be left unattended without any worry of damage to both the microscope and the objects. The microscope itself is in a dust-proof mahogany frame with three glass windows and the slides sit in a revolving stage, making it very easy to go from side to slide. 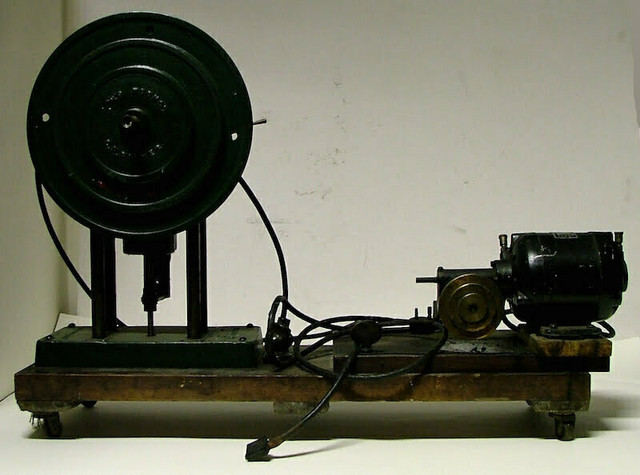 A kymograph (which means ‘wave writer’) is a device that geographically records changes in position over time. The Kymograph consists of a revolving drum wrapped in paper and a stylus that moves back and forth recording any changes such as pressure or motion on that paper. The paper would have time intervals recorded on it which allowed someone to then record the data. The kymograph has been used most commonly in the field of medicine to study things like blood pressure, respiration and muscle contractions. German physiologist Carl Ludwig invented the kymograph in the 1840s and primarily used it to study changes in blood pressure as well as speech sounds. A person would read out loud and the vibrations of the sound would be recorded by the kymograph which made it possible to study sound duration, intensity and pitch. Kymographs were used for a variety of purposes over the course of the 1800s for example, to study the influence of drugs on organs and the function of steam engines.

Kymographs have since been replaced with modern instruments however kymograph analysis is still commonly used in physiological and biological experiments, and in some pharmacological testing, to record mechanical activities of animal tissues and to study how muscular tissue reacts to drugs and other stimuli. 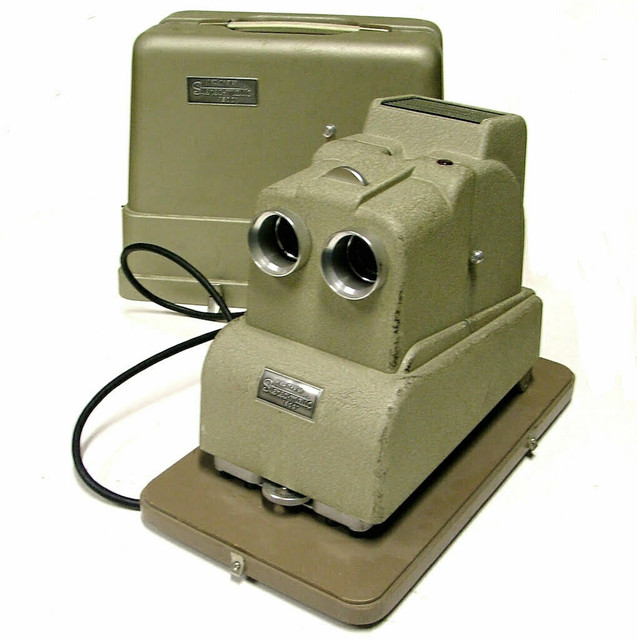 The Viewmaster Stereomatic 500 was donated to Museum Services by the Department of Physiology & Anatomy in 1993. It was created by Sawyer’s Inc in the early 1950s for use with View-Master reels which they began marketing in 1939 from the Portland, Oregon based company. It was used with polarized glasses and a silver screen for stereoscopic projection of reels. Of course, the Stereomatic 500 could be used to project commercial reels as well, a fact not lost on avid collectors of such reels. The introduction of a camera that allowed amateurs to produce their own View-Master reels generated a lot of excitement among fans of the commercial reels, which at the time were dominated by scenic subjects.

This Stereomatic 500 was used by the Department of Physiology & Anatomy to view the original Stereoscopic Atlas of Human Anatomy. Begun in 1952 and not completed until 1962, this series contained 221 View-Master Reels with 1,547 colour stereo views of dissections of every body region. Each stereo view was accompanied by a black and white labelled drawing and explanatory text, and the entire work was assembled into 23 printed volumes grouped into eight sections by body region. This massive project was the result of a cooperative effort between David L. Bassett, M.D., who performed the dissections and wrote the text, and William B. Gruber, the inventor of the View-Master system, who did stereo photography. The Atlas was recognized worldwide as an excellent reference for serious students of Anatomy. 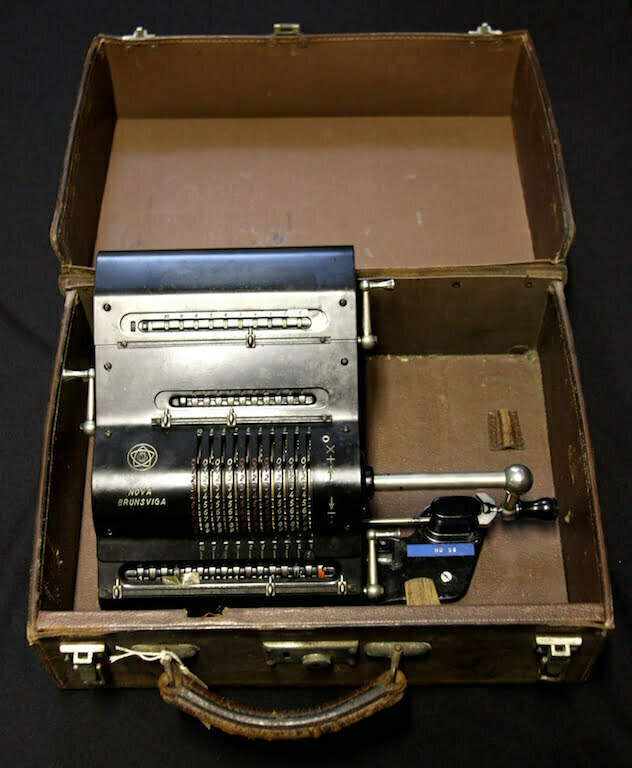 The Brunsviga Nova calculator, circa 1920, is entirely mechanical which is typical of computing equipment used in the mid-1920s. Unlike an adding machine which could just do sums, the calculator could also multiply and divide. This is a far cry from the calculators we see in schools today – and even further than the calculator Apps, we have on our phones! A series of instructions needed to be followed in order to do any calculation, including pulling levers quickly but smoothly, rotating handles and sliding knobs. For example, to multiply 567 by 32:

Here is a video showing how the calculator was used: 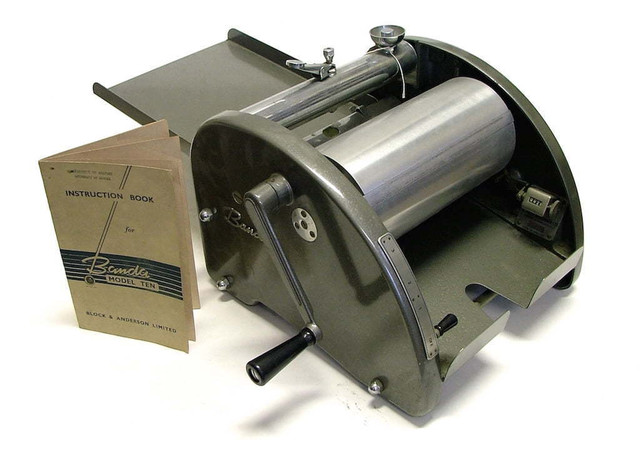 
Donated to Museum services in 1996 by the Department on Physiology & Anatomy, the Spirit Duplicator (or Banda Machine as it is known in the UK) was commonly used in schools, churches and other small organisations to copy documents. The term “spirit duplicator” refers to the alcohols which were a major component of the solvents used as “inks” in these machines. The amount of copies one could make from the original was limited and the copies were very low quality, however, the low cost was very appealing. The spirit duplicator was invented in 1923 by Wilhelm Ritzerfeld and this particular one was manufactured by the Block & Anderson Company, under their “Banda” brand.

The unique aroma of pages fresh off the duplicator was a memorable feature of school life in the spirit-duplicator era and references to the machine can be found in the 1982 film Fast Times At Ridgemont High as well as the blues band Saffire – The Uppity Blues Women in their song “School Teacher’s Blues,” which has the lines, “My fingers have turned purple, My master’s like I chewed it, My mind is getting warped from inhaling Ditto fluid.” 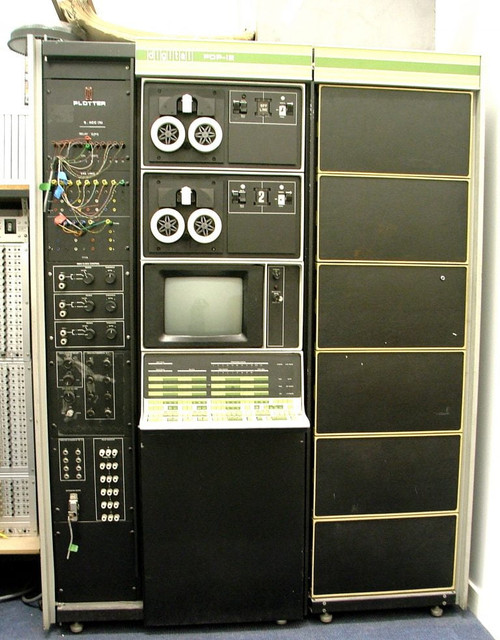 The PDP-12 Programmed Data Processor was the University of Dundee’s first minicomputer. It was a versatile digital computer with two operating modes. On the one hand, the PDP-12 was designed for interactive, real-time laboratory use with its built-in facilities for input/output, auxiliary storage and control sensing of external equipment. On the other hand, it was a general-purpose computer.

The PDP-12 was the University’s first minicomputer and was used from 1968-1981. Until the mid-1970s, the PDP12 was the accepted standard for laboratory control. This version originally had 2Kb of hand-wrapped magnetic coil memory, but was later upgraded with a further 2Kb (the modern PC comes with at least 10Mb). It has some printed circuits, but most of the wiring was done by hand. 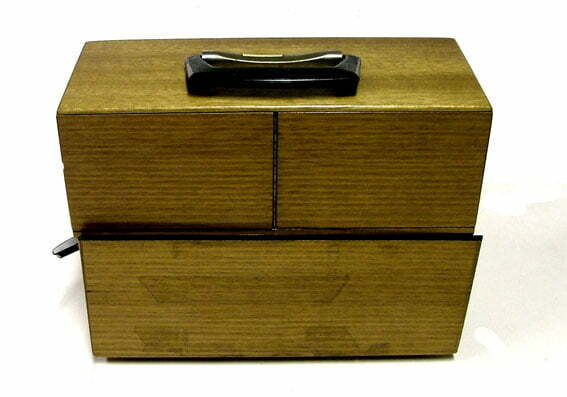 DUNUC 9354, instrument, Acoustic Coupler type TC301 (used as an early form of the modem) Two speakers into which telephone handset would be plugged to couple to another device. Computing Collection.

An acoustic coupler is an interface device for coupling electrical signals by acoustical means — usually into and out of a telephone instrument. The link is achieved through converting electric signals from the phone line to sound and reconvert sound to electric signals needed for the end terminal and back, rather than through direct electrical connection.

Acoustic couplers were sensitive to external noise and depended on the widespread standardisation of the dimensions of telephone handsets. Direct electrical connections to telephone networks rapidly became the preferred method of attaching modems, and the use of acoustic couplers dwindled.

This Acoustic Coupler was donated to Museum Services by the School of Computing in 2005. Although intended to connect audio devices, it was used in the university as a modem to connect computers – but you had to be careful! Connecting too many computers at the same time was a major fire safety hazard!